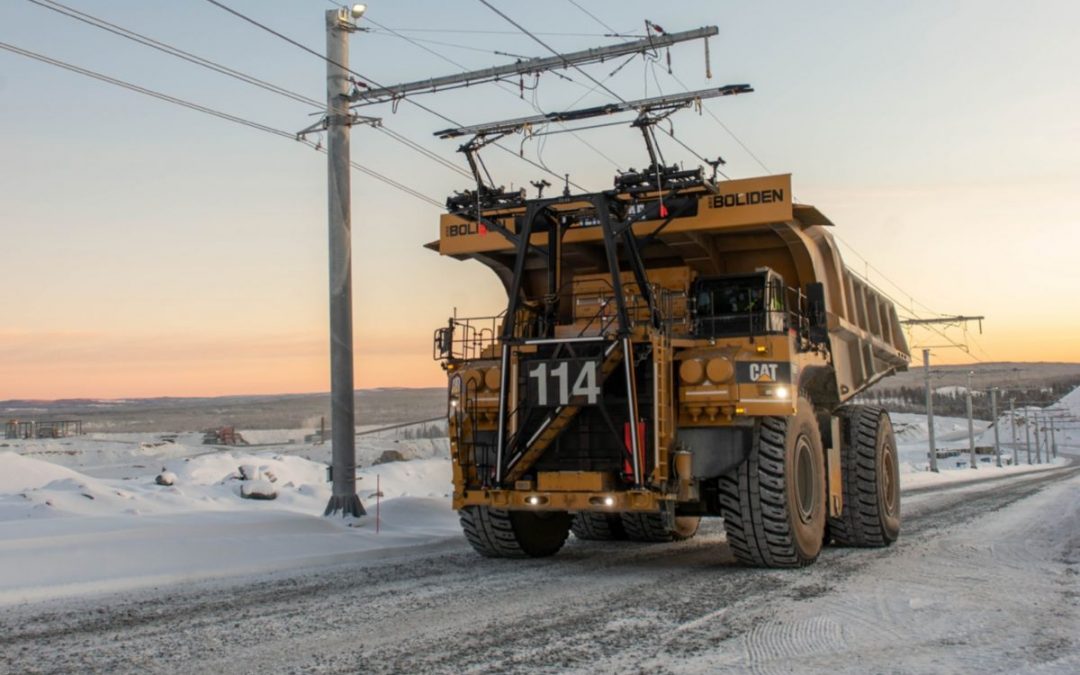 In this first article, of a three-part series we introduce the trolley-assist haulage systems with a focus on what it is, its history and background, how it works, and the concept behind it.

Rarely seen in Australia, Trolley Assist is a system in which haul trucks in open pit mines are propelled by electric energy along a designated haul road segment. This can lead to high savings on fuel costs, productivity, CO2 emission, and engine life, but is associated with limitations in mine planning. Advances in electric-drive haul truck technology over the past 20 years have been remarkable. The drive systems for these trucks consist of two electric drive-motors that are integrated through gears into the rear wheels of the trucks, an electric generator, and a powerful diesel engine. The characteristics of the drive system allow it to harness electrical power directly. In some parts of the world, electrical power can be generated inexpensively and with fewer emissions, depending on the fuel source. Truck trolley systems, which simply substitute electricity for diesel fuel, may offer another avenue for further advancement. Instead of generating electricity from the diesel engine and the electric generator on the truck, it’s sourced from a dedicated substation and transmitted via an overhead catenary to the drive motors on the truck.

History of trolley-assisted systems for mines

The use of truck trolley systems dates to 1882 when Werner von Siemens developed the first electrical driven wagon that followed overhead power lines. This system has been evolving ever since and has been used in the mining industry since 1967 when it was implemented in the Chino Mine in New Mexico. Due to the lack of large trolley equipment, the truck trolley system has never been widely used. The energy crisis in the 1980s led to the development of a trolley system for mines. However, the interest revived again when Caterpillar introduced their first diesel-electric truck in 2006 with a payload of 345 tonnes. Today, Siemens is a leading supplier of trolley technology and infrastructure and the company has seen a lot of renewed interest, primarily due to diesel fuel consumption.

What is the trolley concept?

Trolley-assist truck haulage is a haulage system that utilises diesel-electric haul trucks and then directs grid-based electrical power directly to the truck via an overhead catenary or “trolley-line” in much the same way as a city tram. Illustration from Siemens is given below.

As a result of this approach, the systems are primarily installed on pit and dump ramps, where the drastically reduced fuel consumption (the diesel engine is at idle while “on trolley”) and the increased travel speed (20kph – 25kph loaded up 1:10) result in the most significant cost and productivity benefits.

The trolley system consists of an AC supply, traction substation(s), rectifier(s) and the associated control and protection systems, the overhead catenary system with poles and lines, and the pantograph mounted on the truck. When a trolley system is used during downhill travels, the main benefit is the possibility of regenerating the retarding energy instead of dissipating it in the resistance banks.

There are different possible options to configure the energy source that is being used by the traction drives at any time or condition. Specifically, when the traction system of the mine haul truck hooked up to the trolley system, it can operate using only the power supplied through the trolley system (direct trolley operation) or taking the energy partially from the diesel engine and partially from the electric grid (diesel boost trolley operation).

The truck trolley system is most cost-effective on the ramps, where the most energy is required. As illustrated in the diagram from Siemens below the truck trolley system has the highest benefits when driving uphill on a 6 to 10 degrees ramp. The rest of the haulage route, i.e. flat areas and downhill ramps, will be powered by a diesel engine. It is extremely beneficial to put trolley lines on both uphill and downhill hauls to recover the braking energy. Some mines are now considering trolley assist for flat hauls just to reduce diesel consumption and extend the life of the truck engine.

Instead of feeding power to the truck from the diesel engine, power is drawn from overhead trolley lines. The overhead lines are connected directly to the DC link. At the engine’s top speed, the fuel rate is 450 liters/hr. but with trolley assist, the engine idles and the fuel rate drops to 40 liters/hr. This reduction leads to considerable fuel savings and is a significant step toward mines becoming more energy efficient.

Trolley systems are advantageous for mines where there is a big difference between diesel and electricity costs. For example, a power plant may have its own mine, or a mine may have its own power plant. In such cases, the mines want to run the trucks on trolleys as power is much cheaper for them. Trolley systems for most mining haul trucks are installed for uphill hauls. On the downhill haul, the energy is wasted in the grid resistors. However, the trolley assist system could be designed in such a way that it improves the overall line receptivity of the DC power system by transferring the braking energy to the AC side, and regenerating it, via the transformer, to the AC medium voltage distribution network. This energy could be used by other loads in the mine or used by the utility grid.

What are the advantages and disadvantages of truck-trolley systems?